What Is EPDM Rubber Roofing?

EPDM Rubber What does EPDM stand for? EPDM stands for Ethylene Propylene Diene Monomer. It is a synthetic rubber material made predominantly from Ethylene and Propylene. It is the most widely used non-tyre rubber material in the construction and automotive industries. What is Ethylene Propylene Diene Monomer? EPDM is a synthetic elastomer that is predominantly constructed from ethylene and propylene.

EPDM roofing is one of the key services we offer here at Flat Roof Experts and think that these synthetic rubber membranes are the ideal solution for a wide range of people, from homeowners to business owners. In the years that we have been fitting these rubber roofs, we have seen first hand the wide variety of benefits that are offered by the watertight seal, easy installation, and cost-saving features.

We're passionate about educating people on the benefits of this rubber roofing membrane, especially when compared to more traditional flat roof materials. Here, we'll be exploring the history of this product, some unlikely success with the Nobel prize committee, and how this material has been refined over the decades.

We thought we'd use this guide to help people better understand rubber roofing and the scientific nature of EPDM so that, the next time you need flat roofing installations, you'll know exactly what's going on, and know why Flat Roof Experts are, as our name suggests, the ideal people to help with these roofing systems. To learn more, feel free to read on, or to speak to one of our team about your next rubber roofing project, and how we use quality EPDM adhesives, feel free to get in touch with us by phone on 01274 317 109 or email us at info@flatroofexperts.co.uk.

What Is EPDM Roofing?

An EPDM rubber membrane is a type of synthetic rubber that is incredibly durable and adaptable and, therefore, is used by thousands of professionals for a range of different uses. While our team here at Flat Roof Experts use it in the flat roof trade, EPDM rubber membranes can be used as window and door seals, coating in playgrounds and decking, and in cold rooms such as industrial freezers which help to keep heat out, and cold in. The original rubber adhesive has some limited uses but because its key properties change, and become more brittle as temperatures differ, it has quickly been usurped by its synthetic counterpart that can comfortably handle the heat, and the cold, without breaking or cracking.

From a scientific point of view, EPDM is called a copolymer that has elastomeric properties. A copolymer is a polymer that's derived from more than one species of monomer, and elastomeric properties refer to polymers with viscoelasticity and weak molecular forces. In practice, this just means that the EPDM is viscous and elastic, and can be stretched over a range of surfaces before returning to its original shape, at a molecular level.

How this relates to EPDM rubber roofing is broad, and full of benefits. In practice, the term refers to a variety of roofing methods. These methods include single layer membranes that are used in conjunction with an extensive variety of components such as vapour barriers, thermal installation. Other components include roofing accessories such as drainage, piping, and gravel guards that prevent clogging, and allow rainwater to pass freely.

EPDM rubber roofing systems can be used anywhere but, in our experience fitting flat rubber roofs, we think they work best on low buildings, such as garages and large sheds, that are subject to changing weather conditions, heat, and UV rays. All these factors are very prevalent in the UK, especially in the areas we operate in such as Leeds and Bradford, which is why so many opt for this solution, over standard roofs.

The history of these reliable roofs can be dated back to the early 1960s. They were introduced in 1962 and became extremely popular in the 1970s. This popularity was due to an embargo in the Middle East over oil prices. This embargo drove up the price of oil and asphalt roofs and reduced the quality because there was less global supply. All this forced people to look for alternative roofing systems and EPDM rubber roofing quickly became a popular choice because it was cost-effective, and required very few roofing installation tools to get them fitted.

As the years have gone by, EPDM has seen many improvements and has now become the staple flat roofing system. Broadly, there have been four key improvements. The first improvement was to the seams which held down these roofing options which were changed from a white gas, and Neoprene-based splicing adhesive, to a factory-applied tape that improved the overall finish of the seals. Angle change securement was the second key improvement. Traditionally, wood nailing strips were used but these were replaced in 1989 by something called 'Reinforcing Universal Securement Strips'.

Puncture resistance has also seen dramatic improvements in this roofing range. Nowadays, the standard EPDM rubber roofing systems are 90mm deep which is double what was used between the 1960s and 1980s. This has also made the membrane more weather resistant than ever. A final key improvement has been to the flashing details, in the 1990s wall and curb flashing details were updated and featured cured EPDM membrane. This helped increase UV resistance, weatherability, and durability, and ensured that the EPDM roofing covers the corners and angle changes more effectively.

As well as being used in flat roofing projects, EPDM has also won a Nobel Prize in 1963! Its inventor, Karl Ziegler, who was a German chemist born in Helsa, Germany, is credited with being responsible for the scientific breakthrough that led to the EPDM production process. He combined a titanium and aluminium catalyst that was tested under specific conditions and produced a flexible polymer that had a high tolerance for heat and cold. Three years after its invention, 200 tons of EPDM had been produced and even after many decades, these roofing methods are still prominently used by many people in the industry, including our team at Flat Roof Experts.

EPDM rubber is so widely used because of its robust nature. It is durable, pliable and an excellent insulator. It has fantastic noise reduction properties because it is an elastomer and thus stops vibrations from passing through it. It is also an excellent all-weather material- it is waterproof, windproof, UV resistant, and can withstand high heats and low temperatures. Whatever the weather, EPDM will stay strong and protect whatever is underneath it. It can resist even the harshest of weather conditions. This is why it is the perfect material for a roof. It behaves like an enormous seal, stopping water and anything else from getting through. Did you know that ozone is toxic to some types of rubber? Ozone is a colourless, unstable, toxic gas that occurs naturally in small amounts in our atmosphere. It is made up of three oxygen atoms (O3) and can make many rubber materials degrade and disintegrate. But ozone does not do this to EPDM. Because of the pendant structure of the diene, EPDM is between 100 and 1000 times more resistant to ozone than natural rubber. Again, this is what makes it the perfect material for your flat roof.

This diagram by ResearchGate shows the molecular structure of the EPDM monomer. To cross-link the Ethylene and Propylene molecules together, a pendant diene with double bonds is introduced which ties together the long molecule chains (several thousand molecules long!) of the Ethylene and Propylene. The diene gives reactive sites, and because these are pendant in structure they strengthen the main chains, making the material incredibly resistant. 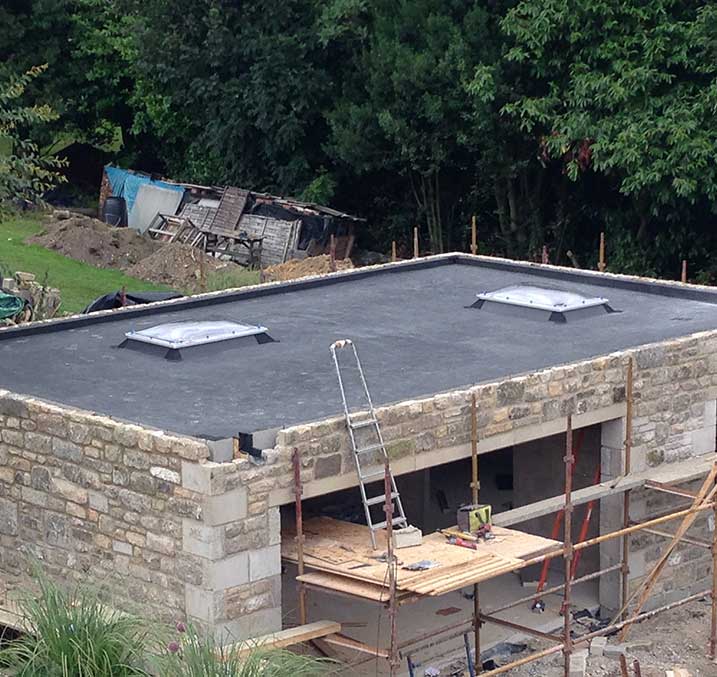 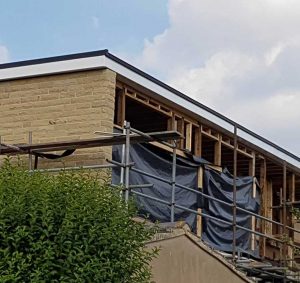 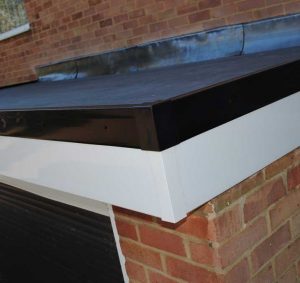 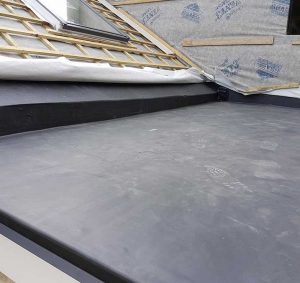 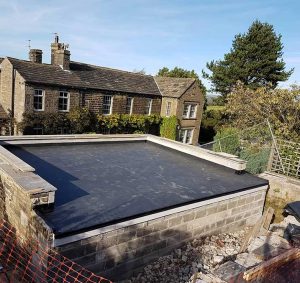 This diagram by Research Gate shows the molecular structure of the EPDM monomer. https://www.researchgate.net/figure/291523288_fig1_Figure-1-Chemical-structure-of-EPDM-mononer To cross link the Ethylene and Propylene molecules together, a pendant diene with double bonds is introduced which ties together the long molecule chains (several thousand molecules long!) of the Ethylene and Propylene. The diene gives reactive sites, and because these are pendant in structure they strengthen the main chains, making the material incredibly resistant.

For any information regarding our roofing services
at Flat Roof Experts please contact us using the details below and one of our experienced staff will be happy to help.